A heat gun is a very useful tool that is used by all handymen who know what they are doing. Most people waste a lot of effort by trying to solve easy tasks with tedious methods. No task is hard if you have the right tools. People who like to do DIY tasks, or people who work in a home laboratory or workshop, Heat guns can come handy every now and then. Here I will recommend you some of the best heat guns, but before we do that I must explain what a heat gun is and what is it best used for.

So, if anyone is reading this because you are tired of doing tasks the hard way, or are reluctant to pay a professional to do something that you can do easily by yourself, then read on carefully. Later on in the article I would share with you five of the most top rated heat guns, if you are already experienced with a heat gun then you can skip on ahead. 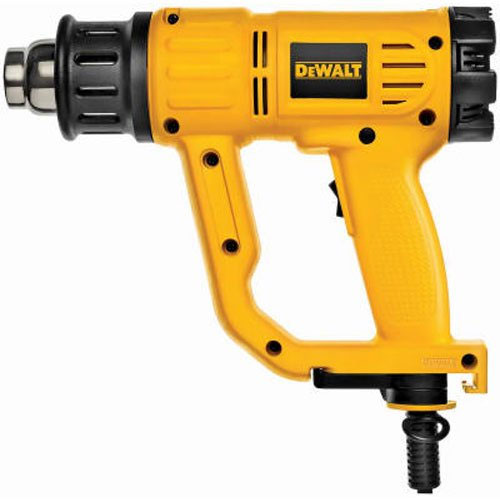 This DEWALT heat gun is the most powerful electric heat gun on the list. If you require a heavy duty heat gun, but do not have excessive budget for a high grade professional, industrial heat gun, this is the one to buy. It is high end and can perform whatever task you want from a DIY heat gun. In essence it is really a professional heat gun priced low enough for home users to buy it. This one according to me is the most bang for the bucks heat gun on this entire list, I highly recommend you go for this if you have the budget. It is also a great heat gun for paint removal due to its lengthy cord, which allows for easy stretching around the room. 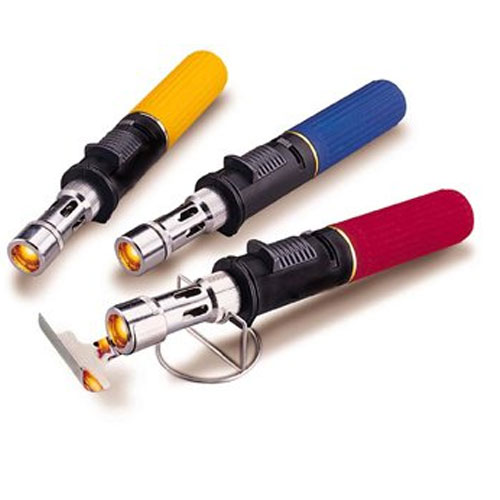 This one is a gas heat gun, meaning it can be used anywhere- no electrical supplies or sockets needed. With mid settings, this heat gun can work up to a 100 minutes before a gas refill is required. Its temperatures can reach up to a whopping 1400 degrees Fahrenheit! This is the best heat gun for shrink wrapping, among other advantages it provides.

What Could Have Been Better
​ 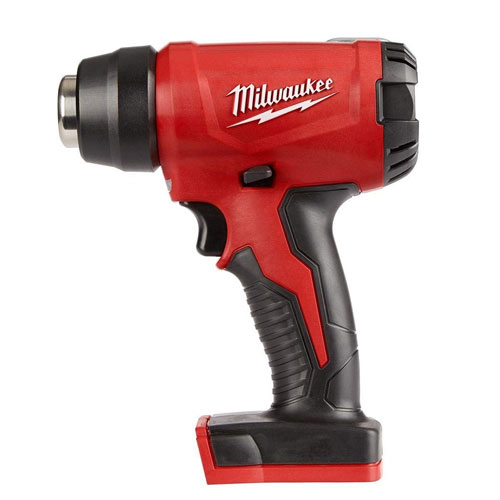 Finally, here we have a battery powered heat gun. As I have explained before, it is a cordless heat gun, and thus is also a portable heat gun. It can be used anywhere without having to worry about any cords. This Milwaukee heat gun is powered by REDLITHIUM battery technologies, the Milwaukee M18 can heat over 40 connections with only one XC5.0 battery. It can provide temperatures rivaling that of corded electric heat guns.

However, batteries are not included with the product. Since the Milwaukee cordless heat gun is very compact, I would say this is the best heat gun for phone repair, because it can go inside otherwise inaccessible places. Many electronic repair work would require the heat gun to be placed in small places at difficult angles, however with this compact electric heat gun you can easily access those tight locations.

What Could Have Been Better
​ 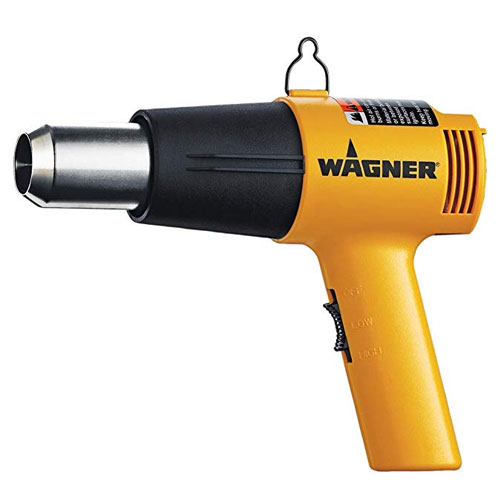 What Is A Heat Gun?

A heat gun machine is a type of tool shaped similarly to a handgun, hence the name. However, instead of firing bullets, it blows out hot air. Its mechanism is fairly simple- what it does is it heats the air inside it while a fan installed in it blows this heated air out, which then passes through the heat gun nozzle and comes out of the heat gun. It is very similar to a blow dryer, the difference being the temperature of the hot air that can be supplied. A heat gun typically is in the range of 200 to 1000 degrees Fahrenheit, so using it to dry your hair might not be a very bright idea.

Heat guns can be used for many types of work. In the heat gun reviews at the bottom, I will list some of the loved and popular heat guns. You can head there directly beneath, or you can continue from here to have a better grasp of what a heat gun is and what features the quality heat gun should have.

What Are The Uses Of Heat Gun?

Heat guns are used for performing a variety of operations, some of the most common ones are:

These are just some of many other heat gun uses. One of the most common household uses is of course the removal of glues. Stickers can be easily taken off without damaging the beauty of whatever it was stuck on, such as a fridge or a car.

You can also use a heat gun for paint removal, which is an easier alternative to using chemicals to do the task. And during winters, the ice preventing water flow in water pipes can easily be melted with a heat gun. There is more heat gun uses- shrink tubing, shrink wrapping, embossing- you name it. Also along with all these, you can even use a heat gun for crafts.

What Types Of Heat Guns Are There?

These use infrared heating instead of blowing out hot air. Infrared heat guns are cheap heat guns compared to both gas heat guns and electric heat guns. However, temperatures are usually in the range of 400 to 600 degree Fahrenheit, thus they are more suited for small projects rather than heavy duty work. For heavy duty heat guns look to the next paragraph.

these are powerful, expensive, professional heat guns designed for industrial usage or construction work. Some even have LCD screens on them and are highly specialized for specific industrial tasks. Temperature setting can even be over 1000 degree Fahrenheit for an industrial heat gun. These are heavy duty heat guns and are not priced at all like a DIY heat gun.

Choosing A Heat Gun | Features To Look Out For

Heat guns for home use usually come with two temperature settings. Some however have continuous variable dials which can be adjusted to give a range of temperatures instead of just one fixed value. When buying a heat gun for sale, make sure its temperature setting options meet the requirements of whatever task you are buying them for. Most general purpose work can be done at the lower temperature setting of a heat gun, which is usually around 400 to 800 degree Fahrenheit. However, it may be convenient to get a heat gun with temperature control.

Other features that might interest you is an airflow control setting. Not all heat guns have this but many do. You might also consider getting a heat gun stand for using the heat gun hands free. This can be incredibly useful for tasks that require your hands to be free such as welding or bending plastics.

Another very useful feature is the dead man switch which some heat guns have. Most only seem to have an on and off switch. What a dead man switch does is it automatically turns the heat gun off if it is dropped. This is especially useful if it drops on a heat sensitive material or falls somewhere inaccessible, where it could catch a fire if left on. This feature is of course only possible in electric heat guns.

What types of heat gun nozzles are there?

For general purpose use, this heat gun nozzle would be sufficient for most tasks.

suitable for heating wooden window frames. This heat gun nozzle helps prevent the glasses of the windows from being damaged. Not just windows, this heat gun nozzle can be used in any situation where wood or plastic needs to be heated whilst in the presence of glassware.

highly suitable for heating PVC or copper pipes. This heat gun nozzle prevents the walls behind the pipes from being heated while thawing frozen pipes.

this one is very helpful and time-saving in situations where a large area needs to be heated. The heat gun nozzle makes sure that heat is distributed evenly over a large surface area.

a cone nozzle is sort of the opposite of a fishtail nozzle. Instead of helping to heat a large area, this heat gun nozzle aids the user in heating a small area. This one is highly useful in situations where a specific part of an object needs to be heated, while the rest of it doesn’t. Use this for careful and detailed tasks, such as soldering or de-soldering wires in a circuit.

What are the heat gun prices?

Heat guns come in a variety of prices. The most common range for heat gun prices are between $10 to $50, however some heat guns can be found even below ten dollars. The more expensive heat guns tend to be above $50 and can even be up to a hundred dollars. But I would say a heat gun of around 20 to 40 dollars should be suitable for most general purpose work; the best cheap heat gun should be found in this price range. For affordable high end heat guns, a range of 40 to 80 dollars is typical, but be prepared to pay a lot more if you’re looking for very high quality heat guns.

How to use a heat gun Safely?

1. It is crucial that someone who is new know how to use a heat gun safely. A heat gun can produce heat at very high temperatures and should not be used without caution. It doesn’t matter if you have the a top rated heat gun if you don’t know how to use it properly. The mishandling of heat guns can lead to very serious accidents.

2.  One of the most obvious things to do before using a heat gun is to obviously wear gloves. A respiratory mask is also needed in order to avoid inhaling any toxic fumes emitted when using a heat gun, especially when stripping lead paint.

However, it is highly recommended that you call a professional when involved in the heating of lead. Goggles are also necessary when performing the tasks so as to protect the eyes, which are one of the most sensitive parts of our body.

3. Other things to make sure is that loose clothing is avoided. A long sleeved shirt or a hanging tie could easily catch fire. For those with long hair it is helpful to tie up your hair or wear a hat. Even people with shorter hair could also wear a cap or a hat when working with a heat gun, but that isn’t necessary.

4. When starting to use the heat gun, be careful to keep it away from any flammable substances. It is generally more sensible to use the heat gun outdoors, however if the task is being performed indoors, make sure the room is well ventilated.

5. After the heat gun’s job is done, turn it off before placing it down. Do not leave it on after putting it on a table or the floor. Let the heat gun cool before finally putting it back to storage, and of course store it where children cannot easily gain access to it. Also, do not forget to read the instruction manual that comes with the heat gun.

Wrapping It Up
There are a lot of heat guns to choose from but you cannot go wrong with any of these recommended five, because each is a high rated Amazon heat gun. Of course, different people would need different kinds of heat guns depending on what work they intend to do with it. So whether you need a DIY heat gun, or a portable heat gun, or even a professional heat gun, I hope this guide has helped you realize what to look for in a heat gun. Hopefully you have found the best heat guns that you were looking for.

Read more :  ​​10 Practical use of heat gun in daily life